This month, the convener of the Scottish Women's Budget Group, Angela O'Hagan, appeared on the Scottish feminist policy podcast On The Engender to talk about gender budgeting. The podcast also features voices from SWBG members talking about why they are part of the group.

Listen below, or find it on iTunes, Spotify, or wherever you get your podcasts

2017 was a busy year for the Scottish Women’s Budget Group, so here's some things you might have missed in some of our key areas of work.

Our first meeting of 2018 will be on February 1st in Glasgow – we’d love you to come along, find out more, and help us plan our work for the year ahead. There are more details below and you can sign up here.

So what is the Scottish Budget anyway?

On December 15th, the Draft Scottish Budget will be announced. Here, we answer some of your frequently asked questions about the budget process in Scotland.

What is the Scottish Budget?

The Scottish Budget is published annually and sets out spending plans for the Scottish Government, including spending on non-executive bodies like Police Scotland and the Crown Office and Procurator Fiscal Service (COPFS), and agencies like Scottish Enterprise.

It also sets out plans to raise revenue through Scotland-specific national taxes.

The Scottish Draft Budget occasionally incorporates a Spending Review which sets out overarching spending and revenue-raising priorities for multi-year periods. A Spending Review is a “strategic vision for Scotland’s public finances” over a four-five year period, and up to now has usually followed a Comprehensive Spending Review by the UK Government which normally comes after a UK General Election.

Equality must be at the heart of Scotland’s budget

In advance of the release of the Draft Scottish Budget, the Scottish Women’s Budget Group is calling for care to be included in the Scottish Government’s planned investment in infrastructure.

She works hard for the money

On Tuesday 7th June, the Scottish Women's Budget Group joined forces with Engender and Close the Gap to hold an event looking at gender budgeting. 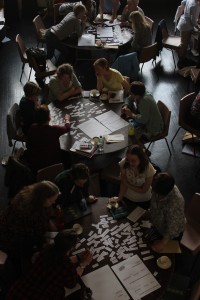 It was a fantastic day, with around 50 women coming together to discuss how we can work together to push for a feminist economic plan for Scotland. A full report is on the way, but in the meantime you can access the slides from Professor Angela O'Hagan here, and Emma Ritch, executive director of Engender, here.

You can also see some photos of the day here.

Two follow up meetings will be happening in Edinburgh and Glasgow in August. Book your place here.

If you want to get more involved in the Scottish Women's Budget Group, you can sign up here.

To join our email list, simply enter your email address below.